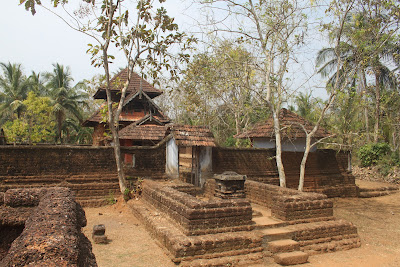 Disclaimer: This post is not intended to discredit or hurt anyone. I have not done a study of the social works (if any) carried out by the temple trust or the swami.This has been written as an observation as to how things have changed and not to malign anyone or any religious sentiments.
at April 11, 2012

Share your sentiments. I still prefer going to those small temples with no dewaswams. All those larger temples; I visit them for the architecture rather than Bhakthi.

Very true...These days, if one has to have a peaceful darshan at one's own pace, one has to go to some small, unknown village temple...

True, Nisha! Commercialization has not even spared the temples:(

Hi Nisha, I've not read this post yet. will be back for it. Just here to wish you a wonderful Vishu. Have a great time. :)

Bhakti is commercialized... These days, I should admit that my belief in God is lowering as people are following all idiotic customs saying that God asked to do so! If there is God who is supposed to be the protector of all human beings without discrimination, there should not be rituals hurting others.

a truly sad state of affairs... to say the least!

Thank You very much Leo!

Yes, Commercialization is stealing the holiness out of it. Doesn't mean that we have to lose our belief...Rituals are man-made, There might have been a reason for their existence; but as you said, it shouldn't be to hurt anyone..

These days most of the temples have become a place to make money, promote menGod and promote party politics. People have ruined it to an extend that I don't find the simplicity and tranquility to sooth a devotee like me.

Very true Leo! It is sad that even temples are becoming unapproachable these days!!!

I agree with LeoPaw.. nowadays its more about business than religion for the temples.. the description you gave saddens me more as it is blatant self-promotion of a human being rather than God itself...

And I agree with you and Leo that the temples have become more like business centres than abode of the God.

Even I felt that it was a blatant self-promotion which I witnessed there. That feeling prompted me to write the above blog.

Thanks for sharing your thoughts and hope to hear from you again!
Regards,
Nishdil

It is true that rituals became more dominant than the true worship.
It surely is an easier mode to augment the revenue. In thekkan mookabi temple at Paravoor the vidyarabha ritual is hundred times bigger an incident than it was years back.okay no comments. but now they have displayed a menu card type big board on the wall with numerous new offerings to the deity(vazhipaadu), which were not prevailing some years back. Saraswathy being the goddess of knowledge, there is a heavy rush during the examination season.Taking advantage of the crowd, temple authorities added special items in the menu like "sreevidya manthram, thattam nivedyam,etc. etc. which we have not heard of in our childhood days. We need not be surprised even if they introduce newer ones like SSLC Malyam,Entrance Vijayeemanthram, UPSC NIvedyam IAS Poosparchana, to cater the demand of the customers.!!

"We need not be surprised even if they introduce newer ones like SSLC Malyam,Entrance Vijayeemanthram, UPSC NIvedyam IAS Poosparchana, to cater the demand of the customers.!! Very well said, Raghu! After all, the success of a business is dependent on the demand- supply chain...

most of our temples became good business firm; they are selling bhakthi.