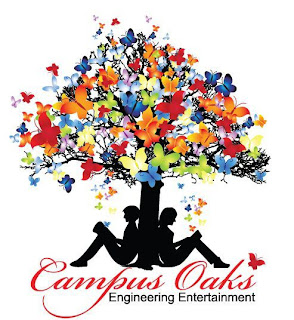 I hope that many such friendships take birth and prosper and continue to strengthen our beliefs in the beauty of friendship. Here is wishing Campus Oaks and CHAPTERS a wonderful opening in the magic land of Cinema!!!
at November 29, 2012

Nisha, let the friendship rocks... I have seen Back of the Beyond as the editing was done by my friend. All the best wishes for their attempts!!!

Well written, Nisha. You have told this story in as engaging a manner as I am sure Chapters itself will unfold. Campus Oaks is truly is a unique 'band of brothers' fairy tale but with all the studied and professional touch that only a bunch of engineers could manage! I am sure that they will begin a new "chapter" which will be just as path breaking and engaging as the one they have written already! Look forward to seeing the movie first day-first show (if possible!) with the co-producer and his family :-)

P.S.: Given my pathological dislike of Facebook, I may not have come across as one of the leading wellwishers of Campus Oaks and Chapters but that belies my high regard and fascination for what this team has pulled off.

Nisha, Nice to know about such collective efforts coming up from our place. May be I will see it one day. Here (south africa)it is not possible to watch Malayalam films. All the best.

Thank you Ajithetta! Hope you will be able to watch the movie when you come home to Kerala...

Thanks Mubi! Glad to know that you have seen Back of Beyond. I shall pass on your wishes to them! Thanks once again!

Jaji,
Thanks a lot! We all know that we have the support of many people like you and that is the driving force. I shall convey your wishes to the team!

The very knowledge that one has the support of his near and dear ones brings in a lot of confidence and enthusiasm.Thanks once again for providing us unconditional support not only in this venture, but always.

Thanks a lot Rahul! It is already creating waves in the industry and most of the reviews that we got also tells us that it is one of the best movies that have been released in Malayalam in the recent times.

It is heartening to see that friends from all over, irrespective of the language are supporting us! Very happy indeed!

Prasannakumari,
I think I am seeing you here the first time. Welcome to Random Thoughts!!!

Thanks a lot for the wishes. Hope you will get to see Chapters one day. Nice to know that even while being so far away from home, you are interested in knowing what is going on here.

Hope to see you again!