Dilemma of an Abandoned Pet 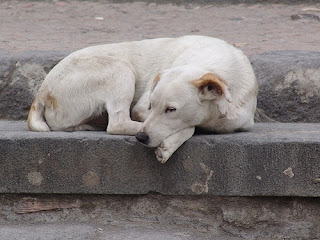 A week or so ago, a dog appeared at our gate out of no where. It was not a rare breed, but a common specimen found all over. Off white in colour, the canine sported a broken collar belt, which indicated that it was some one's pet - rather, used to be!
I am not sure if it somehow lost its way or that someone purposefully abandoned it at our area. Ever since it was turned out on the streets, its existence has become a struggle. For, unlike his street smart stray cousins, this fellow is unable to fend for himself. All he knows is to wag his tail at all & sundry in the hope that someone would be kind enough to care for him.
But, that didn't happen... People have started shutting their gates - which were open 24 hours of the day previously - to keep him out of the premises! When he comes running to the people, they don't take it kindly as they feel it is going to attack them & so, stones him or shoos him away! He is also the victim of the whims and fantasies of naughty children who find happiness in hurting and scaring him just for the fun of it!
Sometimes, I do feel for him! But, even then, I too don't let him inside my gates... I chase him away when my children has to go out, so that he wont run up to them and scare them... But I never hurt him physically. I pretend I am throwing stone at him and chase him away every time he runs up to me, wagging his tail... Despite all these threats he always comes back! These days he has taken to following me to the grocery shop or vegetable shop or even the bus stop just like any other pet would!
Sometimes the dog simply cannot be spotted. At other times, he lies at the gate of my neighbour as a faithful watch dog would...No one gives him a morsel to eat; all chase him away. Still, after some time, he comes back to the same spot and lie down there as if he had been doing that all his life!
Every time i see him there, I think that sooner or later his owners will come in search of him and take him back. Or, maybe some one else would be kind enough to provide him with a shelter. But, till now, nothing of the sort has happened... Till that happens, his existence would be wretched!
I wonder who abandoned him and why!!!
at August 23, 2011