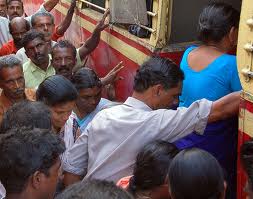 i have traveled in those buses...
one thing that i like very much in them is, BIG WINDOWS and a beautiful BELL :D
but never traveled in a rush or well packed buses :)
and also the sight seeing... wow..

as you said, it will be happy to see a SLIM crowd than overweight crowd :P :D

Took me back to those school/college days. Some things remain the same - the spillover crowd for sure. And its true, some sort of invisible force gets me to the extreme front of the bus.

Yes, the bell is an integral part of the bus... Well, travelling in a crowded bus is akin to travelling in the local trains in Mumbai..

It is basically the lifestyle changes that have resulted in the overweight crowd :-)

Very true... the first thing we did on boarding the bus was to squeeze ourselves through the crowd to the front (as kids, we often ended up on the engine cover/box/or whatever it is called)

As you said, Certain things do remain the same:-)

Keralites lifestyle has changed a lot.Travelling by bus is still interesting...

Very True. our lifestyle has undergone a drastic change...And yes, travelling by bus is still interesting!