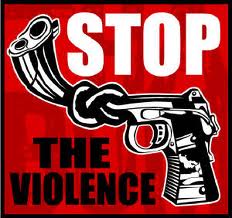 PS: Normally, I don't speak or write about politics (for  obvious reasons), even though I have a political view of my own . But the incidents that shook the soul of Kerala over the past few weeks (if not years) involving the murder of a political leader have forced me to write this.
PPS: Image Courtesy- Google Images
at May 24, 2012

Our generation born and brought up in a moderately secure Kerala. But not any more. Our children will see more violence, more cruelty and more blood. As if some demonic spirit has invaded us. Who will bring a radical and positive change? Or is there no hope left?

Thank You Ajith for your opinion! Though it is a rather delicate situation, I think we should not be disheartened and lose all hope. Sometimes, a small step in the right direction is all that is necessary for initiating a positive step.

If we all decide not to be drawn into the web of violence and cruelty, a lot can be achieved. And more importantly, we need to impart values and ethics in our children and give them courage to go on the right path, even if it not always easy.

Let us hope that a better future is in store and work towards it!

Disturbing facts. Quotation gangs and politicians, hand in hand?? The government being warned about the consequences of arresting the culprits. Even if arrested, the government-police coalition freeing the accused. People are living with fear and not ready to walk on the streets even in day light. And even if we dismiss the government who is inactive and supporting riots and injustice, who will come in their place?? Someone worse...

@ Malini Rajesh, Thank you for your comments!
Yes, each day we encounter more disturbing facts... It seems more and more skeletons are tumbling out everyday... All I hope is that we ourselves would realize the futility of all these violent methods and discard them.
I hope that such a day will dawn!!!
Regards,
Nisha

‘Relative comparison’ is the justification, or defense approach of the time.
If a robber is caught, his excuse is that I have robbed only a purse not a bank,
How many big fishes are left free, after various marathon sessions of farcical commission Sittings chaired by sitting / serving / standing judges!!. Commission reports and findings are stakes made for freezing the further proceedings by
Both the ruling and oppositions repeatedly. If you drop these two cases, we shall drop the other two allegations against you, type of arrangement. Some sort of barter system. Ultimately people forget the allegation or crime and gradually the news goes to the inner pages and vanishes in thin air.
The funny thing is that these commission of enquiries constituted do not have the authority or mandate to initiate any penal measures. They submit their report And recommendations to the government. When the accused group comes to power before or after the final report, they declare another enquiry for the same, Quoting some technical errata, changing the members and terms of reference of the issue.
Gospel of the American democracy is ‘the guilty is to be punished’

Dear Mr.Raghu Menon, First of all, Hearty Welcome to Random Thoughts. It is good to have you here.

What you wrote is the unfortunate reality of things. Many a times, we have seen cases wherein the culprits have made use of the loopholes in the system to go scot-free...That is why we are seeing people charged with more than two dozen cases (including serious crimes like murder) are roaming free, creating terror for the society. May be it is a good idea to bring back the old idea of sending such people on exile to some secluded location, so that at least they cannot sow fear among ordinary citizens...

Thank You Joy Palakkal!!! Good to have you here.
Regds,
Nisha

Senseless violence should be shunned!