Woes of an Old Woman

Today she came with a request- could I dial her daughter's neighbor's number for her? This appeal came from my maid Sulochana. I call her chechi (elder sister) even though I should have called her aunty considering that she is well into the Autumn of life. She told me that she had a nightmare about her daughter and wanted to confirm that she is well. I put the call through and she inquired after her daughter and was told all is well. Satisfied she went on with her chores and left for the next house in her daily schedule. 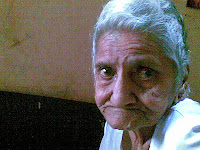 I remember the day she appeared in front of my gate offering her services. It was a couple of days after we shifted to the new place. We had just unpacked all our stuff and put them in their respective places. I wanted to hire a maid and was planning to ask the neighbors, when she came up, offering her service. She told she had worked for the tenant who stayed in this house before us. I told her to come back next day as I had to ask around. After consulting with the land lady I decided to avail her services.

She would arrive at my gates promptly in the mornings and go about her duties. She never took any leave despite her frail health. She had chronic asthma and made regular visits to her doctor. In spite of that she never failed to turn up. That her work left much to be desired is another factor!

Then one day she told me her story: She is a widow - her husband died some 25 years ago- and mother of six children - five daughters and a son. Of the five, one is dead and the others are all married and have kids of their own. The son too is married with children. So, one would think that such a mother would be happily living with her only son. But, no! She has one of the wretched existence.

It seems that she had entrusted the house and few cents of her land to her son, so that they can do some renovation. But the son took the property from her and put it in his wife's name. One day a silly domestic problem snowballed into a huge fight and the daughter in law asked the mother in law to vacate from 'her' house. The old lady was shattered. She had done so much for her son and his family, and now they are throwing her out of the house. All she wanted was a roof under her head - even at this old age she worked as a maid in different houses to earn her living so that she is not a burden on her children. But who cares for an old person???

She was forced to move in with her daughter, who stayed nearby. There she had a roof over her head,but no peace of mind as the son-in-law is a alcoholic who drinks and beats the wife. She is utterly powerless to defend her daughter from this abuse. All she can do is pray for her daughter and pretend that everything is fine. When the beatings got too much to bear, she moved in with her other daughter who stays somewhere away from the town.

Here also, the case is same. Alcoholic husband, abused wife and a battered, sick old woman. She is fed up with everything. One day when the son in law was too violent, the neighbors interfered and threatened him with dire consequences. Since then, there has been a small respite in the domestic violence in the second daughter's case. For how long, nobody knows! The brother too showed up and took the mother to his home. She was happy that at last her son took her with him. 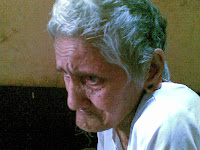 But the joy didn't last. They didn't give her a proper place to sleep or even proper food. When she asked for food, the murmurings of the daughter in law started. Many a days, she went hungry! When she could take it no more, she again moved in with her daughter. Now she commutes from the city to her daughter's place, changing two buses and walking a lot, all for earning some money to buy her medicines and some food. She doesn't want to be a burden on her children and prays to God that she be given the energy to work and earn her livelihood till her last day...

On hearing her story, I asked her why don't she take the help of law? She could have her house back. Also if complaints are registered against the sons in law under domestic violence, some thing could be done to help her daughters. But she says, "whatever he may be, he is my son. I wouldn't want to harm him. Let them take everything. In case of the daughters, if I do something, it might destroy their family life. I only pray that I have the strength to earn till my last day.... "

Sulochana chechi's case is not a one off case. There are thousands of mothers and wives who suffer under the hands of sons / daughter-in -laws and alcoholic husbands. There are laws to help them. But, very few people have the courage to use them. And till these laws are made use of, there will be many Sulochanas and battered wives in this country.
at November 25, 2011

That's one heartrending read. People like her don't deserve to live so miserably. Hope and pray that things work out for her soon.

Makes one sick to know that there are people out there selfishly living their own contented lives while their parents languish helplessly. They don't know what darkness could await them in the evening of their own lives.

Yes, it is disheartening to know that thousands of people are suffering at the hands of their own kith & kin.
There are laws to protect them, but being the emotional people we are, most choose to bear the pain silently than stand up and fight.
And if the victims themselves don't want any redemption, sadly, there is not much we can do.

Parents spend half their lives looking after their children, and most of the time they end up being the cause of most of the bitter rows of all.

I do not know what to comment. Really. If we could drill hole into few peoples' brain to make them understand their responsibilities.
You have done a good job writing about her! Such people really get lost in the crowd.

By doing all these to the parents, the people doesn't think that they will also have to go through the same door at one point.... its really disgusting....

Malini Edathi,
The children who do this to their parents seldom remember that their own children are watching them. Tomorrow it might be their turn to go through these. Then they have no one to blame, but themselves!

Shahana,
There are something that you cant make people understand. It is simply because they don't want to understand. one can rouse only a person who is asleep, and not one pretending to be asleep...

In such cases, there is nothing much an outsider like you or me can do, unless the affected party really wants to do something!

The least I could do was share her story...

Thrayambakam,
Yes, that is very true. People don't realize that one has to walk through the same doors later in the life. Some even foolishly think that "he/she is my son/daughter. She will take care of me!"

But sadly, this is not the case of only economically backward people. Even in higher economic class such things are becoming common.

I don't have word to express my anger and sorrow. This is really a sad state of affairs. Are these so called sons insane? One thing is for sure, they are going to pay for it right here in this world sooner or later.

Leo, I too feel the same. How can one do this to their on Mother!!! But then, such cases are common. If you glance around, many will be there in your neighborhood too..

I only hope that one day things will change for better...